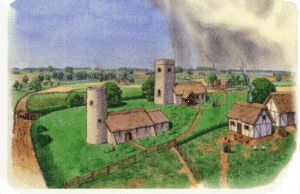 As Christianity took over heathen festivals, most Suffolk villages featured a high location where ritual fire dance festivals could take place. By the 9th century, shrines of ‘All Saints’ had been established, leading to the building of churches.

On this site, for nearly a thousand years, stood All Saints Church, within yards of our surviving St Mary’s. The two churches must have made an impressive sight from the valley below, and were for many years known as ‘Creeting Two Churches’.

Being already somewhat dilapidated, All Saints Church suffered badly in a storm in October 1800. The Bishop’s permission to demolish was given in October 1801, and later the church walls were found to have been built practically without foundations. An aisle was added to St Mary’s Church to accommodate the increased congregation.

Geophysical surveys, conducted by the Creeting Churches Project, revealed the remains of the East wall and part of the South wall of All Saints church.

The illustration shows the site as it might have appeared in the 14th century, with All Saints Church (left) close by St Mary’s. All Saints is shown with a round tower, as several ‘eye-witness’ accounts suggest this. Looking to the north St Olaves Church is visible in the distance, opposite Woolney Hall.