Home > The Lost Church of Creeting

The Lost Church of Creeting 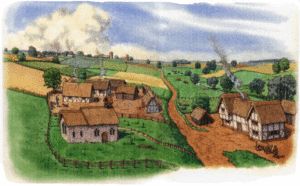 Olaf Haraldsson, King of Norway, became a fanatical Christian. Having fought for Ethelred II in East Anglia against the Danes, Olaf II was canonised on his death in 1028, and he remains a Norwegian national hero. On this site was built the only pre-Reformation church in Suffolk dedicated to St Olaf. The church stood opposite Woolney Hall, the Manor of St Olaves, then held by a freeman named Ulnod.

In 1066, William the Conqueror gave most of Creeting to his generals and to the Church. Robert, Earl of Montaigne, became tenant in chief, and the abbot of Grestein established St Olaves Priory (a cell to the Abbey of St Mary de Bernay, in Normandy). St Olaves was sold about 1350 to the De La Pole family, Dukes of Suffolk. ‘Alien’ priories were suppressed in 1414 during the Hundred Years War with France.

St Olaves belonged to Henry VIII twice during his reign, eventually (in 1540) becoming part of the divorce settlement with his fourth wife, Anne of Cleves. The church lasted for many more years, but by the 18th century had fallen into disuse. In 1735, a visitor to the site recorded ‘Church down. Hath been long down’. Its ruins were visible until the early 20th century.

Project work in 1999 involved field walking (finds including pottery, building material, and bone), magnetometry and resistivity surveys, and historical research. One early discovery was an apparent inaccuracy in the location on the OS map of the parish – the church was shown on the wrong side of the track opposite Woolney Hall.

Historical research revealed that the OS map had placed the church on the wrong side of the track opposite Woolney Hall. The Project field walking, in 1998, confirmed this error when the finds were analyzed. The geophysical surveys of the site were inconclusive so an excavation was conducted to locate the remains of the building. Only the topsoil was removed but in one of the trenches the Project members discovered part of the East wall and out of this feature Medieval painted glass was found dating from 14thC.

No detailed description of the church has been found. The illustration shows the site as it might have appeared in the 14th C, with St Olaves Church opposite Woolney Hall and beside a small settlement. Looking south, St Mary’s and All Saints churches are visible on the horizon.