In this month’s “A Bit of History” the final four servicemen whose names are recorded on the Creeting St Mary War Memorial in St Mary’s Churchyard after they lost their lives in the Great War, are outlined below:

Some of the accompanying photographs have unfortunately suffered damage or have deteriorated with age.

PRIVATE HORACE RACE, 2nd Battalion Suffolk Regt. Son of Harry and Mary Ann Race from Stonham Aspal (the family later moved to Norwich Road, Creeting St Mary). He was another casualty from the Battle of Arleux on 28th April 1917, when the Battalion were in trenches immediately to the east of the village of Monchy-le-Preux. They were apparently “lightly engaged” in Shrapnel and Pick Trenches – but their casualties amounted to 81!  He is remembered on the Faubourg d’Amiens Memorial in Arras as his body was never knowingly recovered. 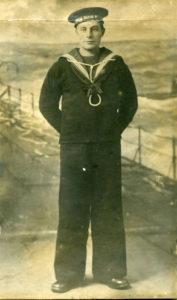 ABLE SEAMAN FREDERICK TAYLOR, Nelson and Hood Battalions: (This army division was formed at the  outbreak of the war by Winston Churchill, who was First Lord of the Admiralty at the time and was composed largely of surplus reserves of the Royal Navy who were not required at sea). He died on 23rd April 1918 at the 149th (RN) Field Ambulance as a result of wounds sustained in the opening hours of the German Spring offensive on the Flesquieres Ridge, south-east of Cambrai. He served with the Mediterranean Expeditionary Force (MEF), probably at Gallipoli but appears to have missed the Battle of the Somme through illness!  Later joining 7th Entrenching Battalion he was cross-posted to Hood Battalion just before he died.  Once again his body was never knowingly recovered and is commemorated on the Faubourg d’Amiens memorial in Arras.

The presumption is that he died and was buried in France as he is commemorated there by the CWGC but the fact that his parents had erected a gravestone in the churchyard at Creeting St Mary could possibly mean that he was transported home and died in hospital in England.

The headstone, near to Private James Mayhew’s reads…. “Frederick W. A. Taylor RNVR. The dearly loved son of A&S. J. Taylor of Creeting St Mary, who died of wounds received in France July 19th 1918. Age 20 years. Greater love hath no man that he may lay down his life for his friends”.

CAPTAIN CECIL ROBERT TIDSWELL, 19th Squadron Royal Flying Corps and 1st Royal Dragoons: He was shot down and killed whilst flying solo over the enemy lines near Bapaume in France on 16th October 1916, reputedly by the Red Baron. He was buried where he fell in his burnt and wrecked aircraft by the Germans. After the war his father bought the piece of ground where his son lay and erected a memorial, which stands to this day.

Although his family visited it every year, the difficulties of looking after a grave in such a remote spot became apparent and in 1926 Tidswell’s sister, Miss A. C. Tidswell wrote from Bosmere Hall, the family home, seeking help.  The family resisted pressure for the grave to be concentrated to a military cemetery and finally, in 1930 a suitable financial arrangement was agreed and thereafter the CWGC has looked after it. Further help came from the family, when in 1983 it was further restored and it stands today on a remote hillside, a credit to the commitment of the Tidswell family and the CWGC. The grave is located near the village of Etricourt-Manancourt, a few miles south-east of Bapaume.

Captain Tidswell was a professional soldier serving in the Boer War and India and believing that there was no future in the cavalry he transferred to the RFC in early 1916. He was 36 years old and the family lived at Bosmere . 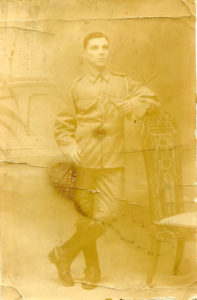 19th Battery, 9th Brigade, Royal Field Artillery. He died age 20 on 28th April 1919 and is buried in the churchyard with a CWGC headstone. He served overseas, most likely on the Western Front and was the son of William and Sabina Woolnough, who lived in the village.

As always, I am grateful to researcher Derek Pheasant, who lives locally, for giving permission to print the above extracts from his booklet Lest We Forget.  We owe him a great gratitude for his dilligent research.

If you are related to or know of any of the names on the War Memorial and have any memories or stories of them, please send them to the Editor for inclusion in subsequent newsletters.

The datails in these articles were taken from an article written by Derek Pheasant.  You can read the original article here.  Creeting St Mary War memorial Information Photographs of the soldiers will be added shortly.