This issue of the Parish Newsletter’s “Bit of History” theme stays with the Great War and people from the village. I am indebted to Marion and Geoff Rivers who have provided the following detail about Geoff’s Grandfather and his experience in the Great War. 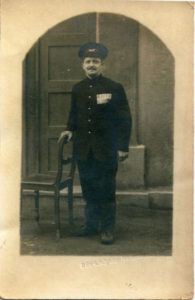 Herbert John Rivers was born on 31 March 1889 at Jubilee Cottages, Jacks Green (these cottages are in St Mary’s Road). In 1907 he became an apprentice gardener at Creeting St Mary Rectory, which at that time had a staff of 15 people. In 1914 he married Isabella Scarlett (from Stowupland) and set up home at the Red Houses, Creeting St Mary.

On 10 December 1915 he was enlisted in the 3rd Battalion of the Suffolk Regiment and after basic training, was sent to France. There he was shot in the leg and sent back to England for treatment. Following a period of convalescence in Wiltshire he returned to France where he was again injured and taken prisoner of war. He always maintained that he owed his life to a fellow prisoner, a Russian Surgeon, who removed shrapnel from his back. During his time as prisoner he was put to work in a salt mine in Saxony. He managed to survive his ordeal and at the end of the war was repatriated, being discharged from the army in October 1919. Herbert received a personal letter signed by King George V after his release from Germany. 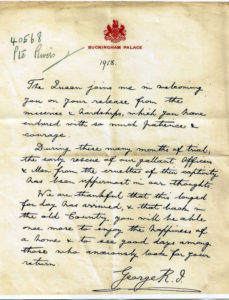 “The Queen joins me in welcoming you on your release from the miseries and hardships, which you have endured with so much patience and courage.

“During these many months of trial, the early rescue of our gallant Officers & Men from the cruelties of their captivity has been uppermost in our thoughts.

“We are thankful that this longed for day has arrived & that back in the old Country you will be able once more to enjoy the happiness of a home & to see good days among those who anxiously look for your return.”

Signed “George RI”, which stands for “Rex Imperator” or “King and Emperor” 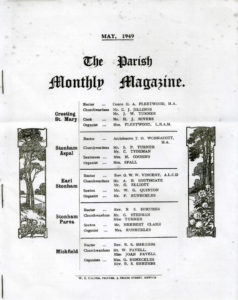 Herbert returned to Creeting and again took up his duties at the Rectory, a position he held until his death in 1963. Herbert and Isabella went on to become very active members of the community. In 1923 Herbert was appointed Sexton and Clerk at the Church and Isabella ran the Post Office from the mid 1930s to the late 1950s from their home at No. 1 Sunnyview (next to the Village Hall) – note Creeting St Mary “Clerk Mr. H. J. Rivers” on the front of the May 1949 Parish Magazine.